This story is essentially complete, but feel free to make improvements!

This is a sequel to Fly Paper in which Scully meets Gary Seven and Roberta Lincoln on the Moon. Gary Seven and Roberta Lincoln were minor characters in the original Star Trek TV series. For background, see this wikipedia article on Assignment Earth, this version of the story and this take-off might provide a chuckle. I have never read any Star Trek books, but the Gary Seven novel Assignment: Eternity by Greg Cox might be fun (great reviews at Amazon; see also his "Eugenics Wars" books for more Gary Seven fiction).

Aids to the reader: list of characters in the X7 Trilogy and a glossary.

"X-Seven" is the second part of a trilogy. It is best to read the three stories in the correct order: Fly Paper -> X-Seven -> Moon Reyes. Alternatively, you can skip Fly Paper if you start with this short X7 introduction. 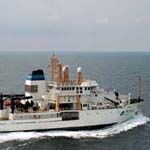 Marine Science Research Vessel Floreana is at sea for the purpose of collecting ocean floor sea life. Operating from the Floreana, the two passenger submarine La Senza is deployed and collecting samples.

Captain Peterson, the pilot of La Senza, is making small course corrections according to the instructions of Dr. Lori Morgan, the mission specialist. Peterson notices a new blip on his radar display panel. "Floreana, I'm reading an obstruction at 200 yards on our current course."

The science mission command crew on Floreana is monitoring the data feeds from La Senza. The mission commander looks at the high resolution radar scan from Floreana. "Okay, we're seeing it from up here, too."

The radio officer speaks into the microphone of his headset, "Roger, La Senza. From here it looks like an isolated feature. Advise you distance yourselves from the bottom. Clearance of 5 meters estimated if you initiate a five degree climb now."

Peterson initiates the climb. Morgan complains, "We are getting too high for the collection boom."

Peterson puts a hand on Lori's tense shoulder; she is slick with sweat. He advises, "Take five, Doctor. You are loosing a lot of fluids. We have a ledge to get over."

Lori is frustrated by the interruption in her work, but she releases her hold on the levers that control the sample collection system and then relaxes back into her seat. She opens a water bottle and drinks, gulping. The view out through her window dims. She can see that Peterson is turning all of the lights forward, towards the ledge they are approaching. Peterson keeps looking back and forth between the radar screen and the forward window. Gradually a hazy form becomes visible in their path. A warning tone starts to grow louder and the thrust gauge starts to register a reduction in thrust. Peterson casually inactivates the automated collision avoidance system and the forward propulsion returns to its previous level. "Floreana, we are at 50 yards. Visual contact."

From above, "Roger, visual contact confirmed on camera 2." Suddenly Peterson cuts the thrusters and the sub slowly drifts over the obstruction. "La Senza, we read forward thrust zero, please confirm."

Peterson wipes sweat out of his eyes and stares out the window as the object on the sea floor comes into position under the submarine. "Lori, are you seeing what I'm seeing?"

She tries to look out the small front window but the angle is bad from her position. She presses a button and shifts her video monitor to the camera 2 circuit. "What the hell is that?"

Peterson replies, "According to radar, that's a perfectly circular disc with a diameter of 20 meters."

Lori shifts her video recording unit from camera 1 to camera 2. "Judging from the accumulated debris, I'd guess it has been down here for thousands of years."

From Floreana, "La Senza, do we have radio contact?"

Peterson shakes his head. He says to Lori, "I've seen dozens of ship wrecks. There was no ship like this thousands of years ago." Then he opens his microphone, "Floreana, communication is nominal. This is no rock outcrop down here."

From Floreana, "Roger, we have your video, Peterson. What does that look like to you?"

Lori notices a glow that seems to be coming from the mysterious object. She orders, "Kill the lights!"

Peterson finally pulls his eyes away from the window to see if Lori is serious. The sub is almost at rest and he decides it would be safe to go dark. This is a request that Lori has made repeatedly in order to photograph the light-producing organisms that are common at this depth. He kills the lights.

As their eyes adapt, they can see a ring of slowly flashing lights around the circumference of the disc. Peterson chuckles, "Okay, that's it. This must be an NSA submarine listening station."

Lori guffaws. "No. I'm telling you, this has been down here a long time. There's no way to explain this."

The science mission commander picks up a phone and speaks, "Captain Kelly? I've got something you have to see."

Sixteen hours later the crew of the Floreana has grappled the disc and pulled it to the surface. Captain Kelly is surprised at how easy it was to raise the artifact from the sea floor. He raises his radio headset, presses one ear piece to his head and speaks into the microphone, “Detach the floatation collar.” Divers in the water start to hammer at the steel clamps holding the floats to the disc. Before any of the floats are detached, the disc surges above the waves and two surprised divers leap off, diving back into the water. Captain Kelly shouts at the crane operator, “Not yet!”

The crane operator is surprised that it was so easy to hoist the disc out of the waves. He looks at a gauge and then shouts to the Captain, "The damned thing weighs less than a ton!"

The crew quickly pulls the disc onto the deck of Floreana, but it is night and totally dark by the time they have the floatation collar detached and the disc secured over the main cargo hatch with steel cables. Finally, the salvaged disc rests lightly on the main cargo hold hatch, a nearly perfect fit to the width of the ship's deck. The science mission commander climbs off of the disc and speaks with the captain, "I see no obvious entry hatches."

The Captain scowls at the disc as crew members continue to scrub accumulated debris off of some of the light fixtures. "Maybe Plato knew what he was talking about. Atlantis and all that crap."

Nearby crew members laugh. The Captain orders the helmsman to head for San Diego. A guard is posted on deck and slowly the crew disperses and goes off to bed. As the Moon rises over the horizon the lights on the disc grow brighter.

"X-Seven" is the second part of a trilogy.
It is best to read the three stories in the correct order: Fly Paper -> X-Seven -> Moon Reyes. Alternatively, you can skip Fly Paper if you start with this short X7 introduction.

If you contribute to Fly Paper, add your name below:

"The X-Files" and its characters were created by Chris Carter and the folks at Ten Thirteen Productions and are borrowed here for the enjoyment X-files fans, without profit or intent for profit. Fox Mulder, Dana Scully, and other features of The X-Files are probably the property of 20th Century Fox or some other for-profit corporation. The discussion of these characters and other elements of The X-Files at fiction.wikia.com should NOT be thought to have been authorized by the creators or current owner of The X-Files.