A science fiction novel created at the Fiction Wikia
VirileMail 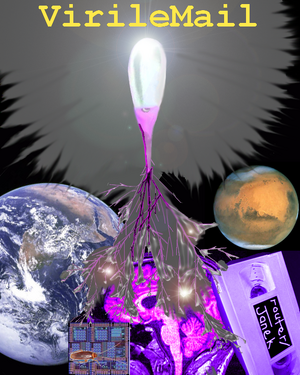 Warning: plot spoilers as in all book covers.

Joe Daonet is a computer network administrator. That means he spends many hours playing computer games and waiting for a glitch in the net. He has been out of college just long enough to realize that he has found what might be the most boring job in the world.

Francis Crick speculated that life on Earth might have been planted here by an extraterrestrial civilization ("Directed panspermia" by F.H.C. Crick and L.E. Orgel 1973 Icarus volume 19, page 341. Also, Crick's book Life Itself).

VirileMail tells the story of Joe Daonet, his co-workers and how they make Contact with the first artificial intelligence to arise on Earth. Is this machine intelligence the work of computer genius Dr. Daniela Gajduskova in the Czech Republic, a randomly assembled collection of software code on the internet, or the first sign of an alien invasion of Earth?

If you want to simply read the story, go to the start of the story.

If you want to participate in the construction of this story read the plans at this page. <-- Spoiler warning! Plot and ending details!

Retrieved from "https://fiction.fandom.com/wiki/VirileMail/Book_Cover?oldid=53015"
Community content is available under CC-BY-SA unless otherwise noted.