The United States presidential election of 2020 was the 59th quadrennial presidential election. It was held on Tuesday, November 3, 2020. Incumbent Democratic President William C. Holland defeated John Dickenson, the Republican nominee. With 66.1% of the popular vote, Holland won the highest share of the popular vote of any candidate since the uncontested 1820 election.

Holland had come to office in January 2017, defeating his Republican opponent, President Mitt Romney, in the midst of the Great Recession and of military conflicts in Afghanistan, Syria, and Yemen. Holland, who had successfully revived economic growth and brought a close to these conflicts, was renominated without opposition in 2020. Holland ran alongside Vice President Robert Holtzman of Illinois. Senator John Dickenson of Mississippi, one of the most conservative Republicans in the Senate, defeated moderate former Governor John Kasich of Ohio and Governor Rick Scott of Florida at the 2020 Republican National Convention.

Holland championed his passage of the Criminal Justice Reform Act, and his campaign advocated a series of new economic programs known as the New Destiny. Dickenson called for the elimination of federal programs and spending, and he voted against the Criminal Justice Reform Act. Democrats successfully portrayed Dickenson as a dangerous extremist, most famously in the "Confessions" television advertisement. The Republican Party was badly divided between its moderate and conservative factions, with Kasich and other moderate party leaders refusing to support Dickenson. Holland led by wide margins in all opinion polls throughout the entire campaign.

Holland carried 49 states and the District of Columbia, earning the highest absolute total of electoral votes for a presidential candidate in modern times. Dickenson won only his home state of Mississippi, losing several Republican strongholds throughout the rest of the country. Holland's landslide victory coincided with the defeat of many conservative Republican Congressmen, and the subsequent 117th Congress would pass major legislation such as the Immigration Reform Act of 2021 and the Revised Voting Rights Act of 2023. Dickenson's unsuccessful bid spelled an end to the Reagan Era and spurred a realignment within the Republican Party, which culminated with the 2028 presidential victory of Nikki Haley.

Although Dickenson had been successful in rallying conservatives, he was unable to broaden his base of support for the general election. Shortly before the Republican Convention, he had alienated moderate Republicans by his vote against the Criminal Justice Reform Act, which Holland championed and signed into law. Dickenson said that he considered criminal justice a states rights issue, rather than a national policy, and believed the 2020 act to be unconstitutional. Dickenson's vote against the legislation, along with his racially charged comments (as covered below) and opposition to immigration reform, helped cause African Americans, Asians, and Hispanics to overwhelmingly support Holland. Dickenson had previously voted in favor of the 2014 and 2016 Drug Policy and Rehabilitation Acts, but only after proposing "restrictive amendments" to them. He was also infamous for speaking "off the cuff" at times, and many of his former statements were given wide publicity by the Democrats. In the early 2010s, Dickenson had called the Lamar Alexander administration a "betrayal to the American people", and the former president never forgave him or offered his full support in the election.

In December 2017, he told a news conference that "sometimes I think this country would be better off it we could cut out all the cities and let them float into the sea", a remark which indicated his dislike of the liberal economic and social policies associated with those parts of the country. That comment came back to haunt him, in the form of a Holland television commercial. He made a series of remarks that alienated virtually every segment of the electorate, including, besides minority voters, suburbanites, college graduates, seniors, rural voters, and working-class voters. He talked about eliminating the Federal Reserve and the TVA, abolishing several other federal agencies (including the Departments of Energy, Commerce, and Education, as well as the EPA), making Social Security voluntary, privatizing Medicare and Medicaid, ending inoculation programs, and cutting off agricultural, energy, and rural development subsidies (which he viewed as wasteful and unconstitutional). Moreover, he made a series of comments that were seen as racially insensitive by many, such as calling Hispanic immigrants "wetbacks", declaring the country was better off during slavery, and denouncing all amendments passed after the Bill of Rights, particularly the 14th and 15th Amendments. Dickenson also made a pejorative remark about "Third World hellholes", which upset many. In his most infamous verbal gaffe, Dickenson talked about "the need to embrace all of God's children, blacks and whites, browns and oranges, reds and yellows", sparking considerable outrage. Finally, Dickenson made a series of controversial comments about foreign policy, calling for U.S. withdrawal from the UN, for the termination of all foreign aid, and for the bombing of Iran, North Korea, and the Palestinians, policies viewed as reckless by many independents and moderates.

Dickenson was also hurt by the reluctance of many prominent Republicans to support him. Former Governor John Kasich of Ohio, former Governor Brian Sandoval of Nevada, former Governor Jon Huntsman of Utah, former Governor Tim Pawlenty of Minnesota, Governor Charlie Baker of Massachusetts, and Governor Larry Hogan of Maryland refused to endorse Dickenson and did not campaign for him. Dickenson was also denounced by former President Mitt Romney and by former Vice-President Dan Quayle. Former Republican nominee George W. Bush declined to offer his support for Dickenson. On the other hand, former Vice-President Pete Wilson and Governor Rick Scott of Florida loyally supported the GOP ticket and campaigned for Dickenson, although Wilson did not entirely agree with Dickenson's political stances and said that his platform needed to be "challenged and altered" by the party. Several prominent Republican outlets, including The New Hampshire Union-Leader, The Houston Chronicle, The Dallas Morning News, The Columbus Dispatch, The San Diego Union-Dispatch, The Detroit News, The Chicago Tribune, and The Cincinnati Enquirer, supported Holland in the general election, the first time they had endorsed a Democrat in many decades. Some moderates even formed a "Republicans for Holland" organization, although most prominent GOP politicians avoided being associated with it.

Alexander's strong backing could have been an asset to the Dickenson campaign, but its absence was clearly noted. When questioned about the political capabilities of the President's son Will, in July 2020, Dickenson replied, "One Alexander a generation is enough." However, Alexander did not openly repudiate Dickenson and made one television commercial for Dickenson's campaign.

Holland positioned himself as a moderate and succeeded in portraying Dickenson as an extremist. Dickenson's habit of making blunt statements about war, nuclear weapons, and economics was turned against him, to great effect. Most famously, the Holland campaign broadcast a television commercial in September 2020, dubbed Nuclear Armageddon, which depicted the devastating effects of nuclear war, implied to result from a "rushed" military action on Dickenson's orders. The ads were in response to Dickenson's advocacy for aggressive U.S. intervention in Iran, Syria, and Yemen, a policy which was opposed by most Americans. Another Holland ad, Confessions of American Voters, depicted various Americans expressing their disgust with Dickenson's views on race, trade, immigration, and foreign policy, and their concerns about his "brashness" and "impulse of action." Voters increasingly viewed Dickenson as a right-wing fringe candidate. His slogan "You know he's straight" was successfully parodied by the Holland campaign into "You know he's mad", "You know he's far out", and "You know he's delusional."

The Holland campaign's greatest concern was voter complacency leading to low turnout in key states. To counter this, all of Holland's broadcast ads concluded with the line "Vote for President Holland on November 3. America cannot afford the consequences if you do not." The Democratic campaign used two other slogans, "Move forward with WCH" and "Americans for WCH."

The election campaign was disrupted for a week by the death of former President Jimmy Carter on October 7, 2020, because it was considered disrespectful to be campaigning during a time of mourning. Carter died of natural causes. He had been U.S. president from 1977 to 1981. Both major-party candidates attended his funeral.

Holland led in all opinion polls by huge margins throughout the entire campaign.

The election was held on November 3, 2020. Holland was reelected in a popular and electoral vote landslide, winning over 66% of the popular vote, the highest percentage since the popular vote first become widespread in 1824. Only Mississippi and Nebraska's 3rd congressional district voted for the challenger, resulting in an even more lopsided Electoral College tally. Dickenson received just seven electoral votes, the lowest ever won by an American presidential candidate. It was lower than Walter Mondale (1984), Alf Landon (1936), or President William H. Taft (1912); Landon and Taft had won just eight electoral votes in their own presidential bids.

The 2020 election marked a significant milestone for the Democratic Party in the electoral sense. With this victory, Holland became the first Democrat to win the states of Wyoming, Utah, and Idaho since Lyndon Johnson in 1964, and only the second Democrat, following Jimmy Carter, to carry Alabama in an uncontested fashion since Adlai E. Stevenson had done so in 1952. He also became only the second Democrat in history, following Johnson, to win the state of Alaska.

The Holland landslide defeated many conservative Republican congressmen, giving him a majority that could enact a more progressive policy agenda.

This is the last election before the admission of Puerto Rico into the Union.

The Holland campaign broke two American election records, previously held by Ronald Reagan and Lyndon Johnson: the highest absolute number of Electoral College votes ever won by a major-party candidate running for the White House (with 531 to the 525 won by Reagan in 1984) and the largest share of the popular vote under the current Democratic/Republican competition (Johnson won 61.1% nationwide, Holland 66.1%). Holland also won the highest percentage of the Electoral College on record (98.69%), surpassing Roosevelt's record (98.49%) from 1936. Holland retains the highest percentage of both the popular and electoral vote as of the 2028 election. 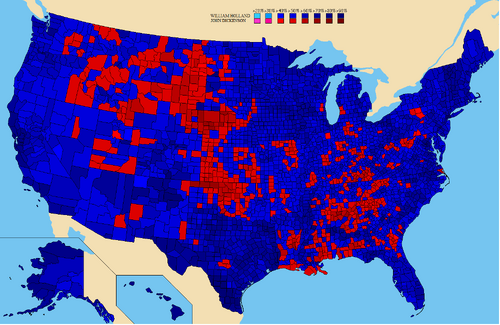 Results by county, shaded according to winning candidate's percentage of the vote.

Map of the 2016 presidential election by state with electoral votes.

States with the Smallest Margin of Victory:

States with the Largest Margin of Victory:

States with Highest Percent of Vote:

States with Lowest Percent of Vote:

Counties with Highest Percent of Vote:

Counties with Lowest Percent of Vote:

Counties with Lowest Percent of Vote and Win:

Counties with Highest Percent of Vote and Lose: