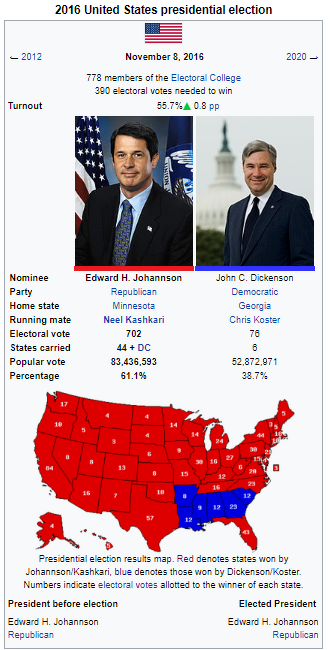 Johannson, who had previously served as the Governor of Minnesota prior to his elevation to the Presidency, had carried out a domestic policy agenda known as the Contract with America, aiming to revamp the nation's infrastructure, expand the nation's domestic energy production, reform the tax code, and encourage economic growth, in addition to targeting red tape, overhauling the nation's immigration system, and enhancing civil rights protections. This policy agenda enjoyed broad support with much of the national electorate. Dickenson on his part, proved to be an ineffective opponent, unable to formulate a coherent response to the Republican policies, and his campaign was marred by a series of controversies and gaffes, undermining his credibility.

As the country enjoyed peace-Johannson had ended the Iraq War-and experienced widespread economic growth, few doubted that the President would be easily re-elected. The successful resolution of two international crises-the Syrian anthrax attacks and the Persian Gulf Affair-in the weeks before the election, further bolstered Johannson's popularity and gave voters the confidence to send him back to office. Johannson led by wide margins in all public opinion polls conducted during the campaign.

Ultimately, on Election Day, Johannson won in a landslide, carrying 44 states and the District of Columbia. Obtaining more than 61 percent of the popular vote, Johannson also helped to bring in many new Republican Congressmen and Senators, giving the Party a supermajority in both Houses of Congress. Dickenson won only his home state of Georgia and five other typically Democratic states in the Deep South-Arkansas, Alabama, Louisiana, Mississippi, and South Carolina. During Johannson's second term, he would push through additional elements of his Contract with America agenda, such as federal education aid reform, drug policy reform, technology and job training programs, and Medicaid expansion, a path made easier by the enlarged Republican majorities.

With an incumbent and popular President running for reelection against token opposition, the race for the Republican nomination was largely uneventful. On April 3, 2016, Johannson officially clinched the number of delegates needed to be nominated at the 2016 Republican National Convention in Cleveland, Ohio. He accepted the nomination on July 21, 2016, and retained Vice President Neel Kashkari as his running mate. During his convention and throughout the campaign, Johannson focused on three themes: on keeping America at peace abroad and on strong terms with its allies, on the successes of the Contract with America, and on the thriving economy, with the booming job market and strong economic growth. 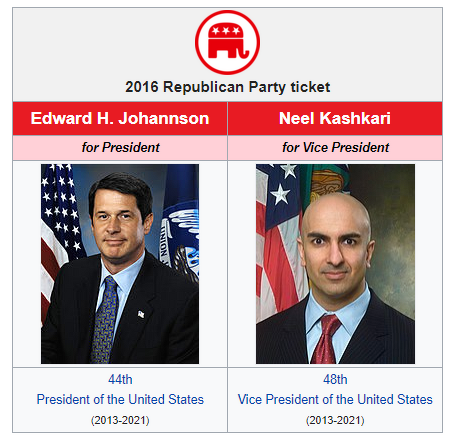 Governor John C. Dickenson of Georgia, who had narrowly lost the Democratic nomination in 2012 to Senator Mark Warner of Virginia (who lost the general election to Johannson that year), and had also previously served as Secretary of Defense in the Nunn Administration and in the U.S. House, became the first Democrat in the field to formally launch a major candidacy for the presidency with an announcement on April 12, 2015. While nationwide opinion polls in 2015 indicated that Dickenson was a frontrunner for the 2016 Democratic presidential nomination, he faced a strong challenge from populist former Governor Brian Schweitzer of Montana, who became the second major candidate following his announcement on April 30, 2015. By September 2015, polls indicated that the gap was narrowing between Dickenson and Schweitzer. By that point, three other candidates had entered the race: former Senator Ken Salazar of Colorado on May 30, 2015, Governor Brad Hutto of South Carolina on July 2, 2015, and former Governor Bill Richardson of New Mexico on September 6, 2015.

On October 20, 2015, Hutto announced his withdrawal from the primaries and endorsed Dickenson. On October 23, Salazar also withdrew, endorsing Schweitzer, and narrowing the field to Dickenson, Schweitzer, and Richardson. On February 1, 2016, Dickenson won the Iowa caucuses over Schweitzer by an narrow margin of 0.2%. After winning no delegates in Iowa, Richardson withdrew from the presidential race that day. On February 9, Schweitzer bounced back to win the New Hampshire primary by a comfortable margin. Dickenson won both of the remaining two February contests, obtaining 53% of the vote in the Nevada caucuses and a landslide in the South Carolina primary, with 73% of the vote. On March 1, 11 states participated in the first of four "Super Tuesday" primaries. Dickenson won Alabama, Arkansas, Georgia, Tennessee, Texas, Oklahoma, and Virginia, while Schweitzer won Colorado, Massachusetts, Minnesota, and Vermont.

On June 4 and 5, Dickenson won two victories in the Virgin Islands caucus and Puerto Rico primary. On June 6, Dickenson reached the number of required delegates necessary to win the Democratic presidential nomination. The following day, he secured a majority of pledged delegates after winning primaries in California, New Jersey, New Mexico, and South Dakota, while Schweitzer only won in Montana and North Dakota. Dickenson also won the final primary in the District of Columbia on June 14. Two days later, Schweitzer dropped out of the race and formally endorsed Dickenson. The two later appeared together at a rally in Kentucky on July 15. 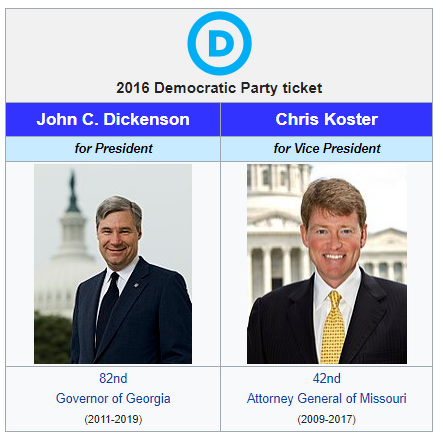 Libertarian Party candidate R. Lee Wrights received 177,146 popular votes (0.13%). Wrights, who had previously served as Vice-Chair of the Libertarian Party, had run for the Party's nomination in 2012, but had lost narrowly to Sam Sloan. He had also run for Governor of Texas in 2014. His share of the popular vote was a substantial drop from the 2.55% Sloan had received in 2012.

Although Dickenson was able to consolidate the support of the Democratic establishment behind him, the bruising primary battle with Schweitzer had nevertheless left him wounded for the general election. The Governor of Georgia campaigned as vigorously as he could, but he was unable to present an effective alternative to the incumbent Administration, nor was he able to match the superior campaign infrastructure and outreach of the Johannson campaign. Johannson, who presided over a period of economic prosperity at home and peace abroad, vigorously hit upon his accomplishments, reminding Americans of the perilous domestic situation with which the country had been confronted upon his election in 2012, and the steps which he had taken to address that situation. Specifically, he was able to highlight the central elements of his Contract with America, chief among which were infrastructure investment, education reform, and tax reform, policy items that enjoyed widespread support among the American populace. Dickenson attempted to argue that the President had not gone far enough in addressing the issues with these areas of concern, an argument that was not bought by many voters.

Dickenson was also hurt by a series of scandals and gaffes that rocked his campaign. Notorious for his off the cuff speaking style, the Governor made comments that alienated certain segments of the voting electorate. He referred to the children of Hispanic immigrants from Latin America as "wetbacks", suggested that women "do better in the home than they do in the public" (in response to a inquiry about his family life), and made a series of errors about the locations of American personnel and allies in Africa, Europe, and the Middle East. He also demonstrated unfamiliarity with aspects of monetary, fiscal, and tax policy. Johannson highlighted these comments in a series of television ads, and on the campaign trail, Vice-President Kaskhari attacked Dickenson for some of his more misguided remarks.

Moreover, two foreign policy crises in the weeks immediately preceding the election helped to bolster Johannson's popularity and increased support for him among the electorate. The first of these, the Syrian anthrax attacks, resulted in condemnation by the international community and the application of sanctions against the Assad regime, efforts that were led by President Johannson. The second, the Persian Gulf Affair, saw Johannson successfully applying diplomatic pressure on Iran to withdraw its naval vessels from the Persian Gulf, preventing a armed confrontation between that country and Saudi Arabia.

Roughly three-quarters of the counties (2,371) were carried by the Republicans. The Democrats carried only 773 counties, the smallest total for the Party since the split between the Northern and Southern Democrats in the 1860 presidential election. Outside of the antebellum slave states and Oklahoma, the Republican dominance was nearly total. Not a single county was carried by the Democrats in the Northeast, the first time ever that this occurred. In the Midwest, there were only eight Democratic counties [1], and throughout the West, there were only nine Democratic counties [2]. In 30 states, the Dickenson-Koster ticket failed to carry a single county [3]. Within the South, Johannson won a majority (817) of the 1,537 counties.

The distribution of the county vote accurately reflects the overwhelming character of the majority vote. Johannson received 61.05 percent of the total vote, the largest percentage won by a presidential candidate of any party since the popular vote first became widespread in 1824. He won the election by more than 30.5 million popular votes. No earlier President had won by so large a margin. His popular vote margin of 22.36% was the largest recorded since Franklin D. Roosevelt's landslide reelection in 1936. Dickenson won only the electoral votes of his home state of Georgia and of five other states in the solidly Democratic Deep South-Alabama, Arkansas, Louisiana, Mississippi, and South Carolina. 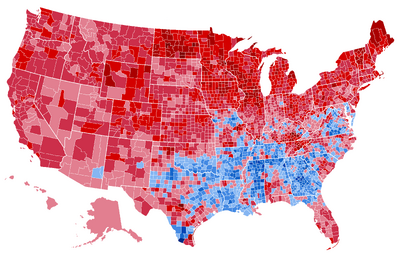 Results by county, shaded according to winning candidate's percentage of the vote.

Map of the 2016 presidential election by state with electoral votes and statewide percentages.

States with the Smallest Margin of Victory:

States with the Largest Margin of Victory:

States with Highest Percent of Vote:

States with Lowest Percent of Vote:

Counties with Highest Percent of Vote:

[1] These were Adams, Brown, Dubois (the best Democratic county outside of the South), Franklin, Jackson, Knox, Perry, and Wells Counties, Indiana.